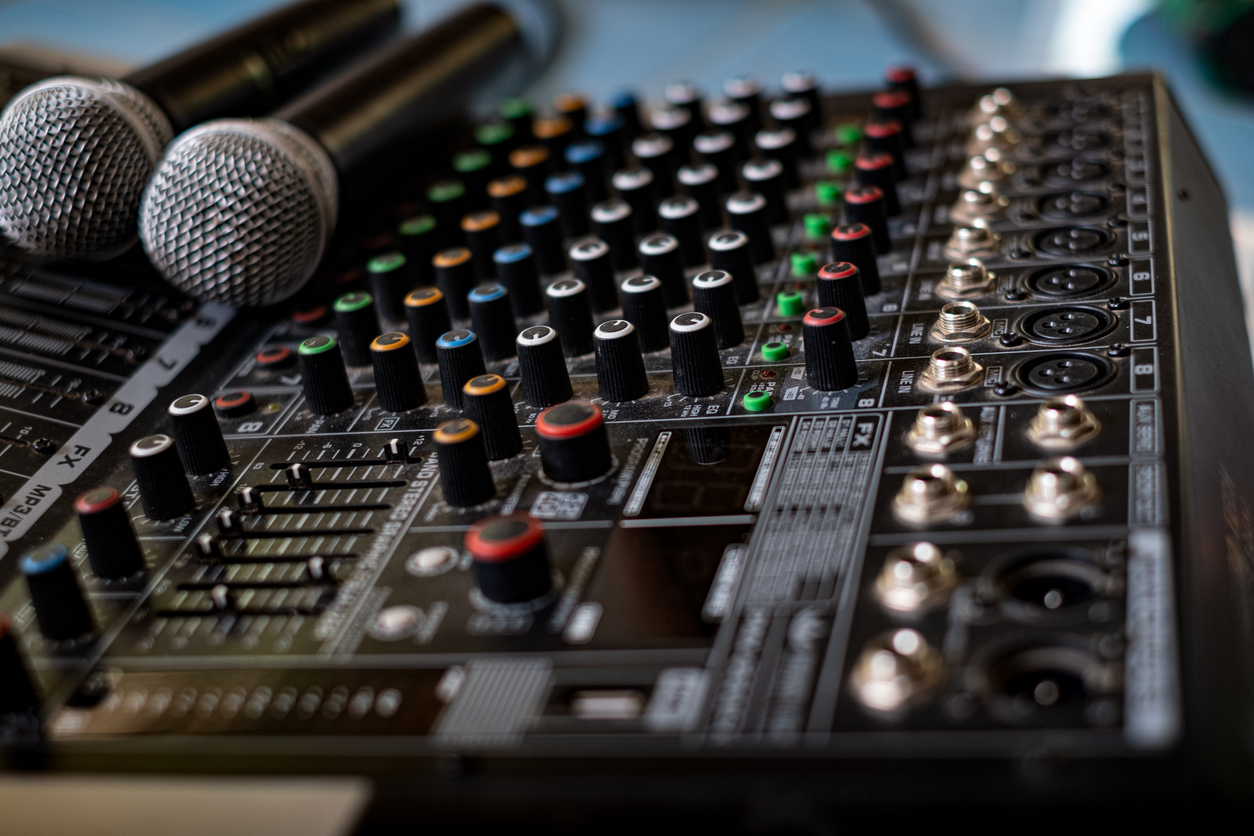 Across all genres and styles of recorded music, a pro-level, polished mix makes all the difference to the success of a track. And if the music you’re working on has vocals in, the vocal mix is absolutely paramount. So if you want to learn how to mix vocals, read on…

Let’s agree on some basic ideas about what a good vocal mix sounds like, and see if that helps us to discuss useful strategies and approaches for mixing vocals.

A good vocal mix should:

Not super controversial statements, right? Just enough to give us some direction as to why we will make certain mixing choices. So, bearing in mind the above values, let’s get into the techniques.

First is subtractive EQ in the low end: cut out everything from around 75Hz and below to clean up any unhelpful rumble in your recording. There are no vocal frequencies in that range, so nothing is lost by doing this, and the overall perceived effect is that the vocal will sound brighter.

Second is additive brightening: create a shelf at around 10kHz, and start by giving it 2-3dB of gain. You may even decide you want more, but start there and see how it sounds. People often call this 10k boost giving the mix more “air”, and it’s going to help the vocal cut through the mix in a pleasant way. If you start to boost like this below 8k, the sibilants of the vocals are likely going to start sounding harsh and piercing.

Once you’ve got that basic setup in place, you can take a look at some more fine-grain EQ moves.

The most important EQ technique that will take your mix to the next level has to do with identifying offensive frequencies and eliminating them.

Sometimes recordings, due to the combination of the space and the voice and the microphone, end up having certain frequency ranges that stand out in an undesirable way. Those are creatively named “offensive frequencies”, and as your mixer ears develop you’ll be able to spot them more quickly.

One way to confirm an offensive frequency is to take a bandpass filter, set the bandwidth (“Q”) very narrow and the gain very high, hit play, and then sweep slowly through the entire spectrum. The offensive frequency will jump out at you when your bandpass rolls onto it.

Once you’ve identified the frequency, leave the bandpass on it and bring the gain down below 0dB to a point that feels right to you. You’ll want to find a goldilocks point in the gain reduction that eliminates the offensive frequency without marring the overall character of the vocal sound.

After eliminating offensive frequencies, another advanced technique to consider is using multi-band compression.

But that’s compression and not EQ, right?

Yes, technically, but there’s a way to use a multi-band compressor with more of an EQ-ing mentality.

When we remember that the multi-band compressor has the ability to sculpt a certain range of frequencies in a responsive and dynamic way, we can start to view it more as an EQ that breathes and responds to the track.

Probably the best application of multi-band EQ on vocals is to bypass 8k and above, and see how the mix benefits from compressing the middle frequency ranges. This can be especially helpful if you want to work closely on a tricky frequency range without sacrificing any sound in other ranges.

Give it a try!

Since compressors came up, let’s get into them now. They’re a natural next step after EQ, anyway.

Putting some compression on the vocal overall is a great place to start for getting that finished/polished vocal quality. For a global compressor on vocals, definitely use a light touch: consider a low ratio (1.1:1 to 2:1 range), relatively fast attack and release, and a low threshold (GR meter not exceeding 2 to 3dB at any point).

After that global compression is probably the best time to start exploring multi-band compressors.

Besides the aforementioned application, where we focus on a specific range like it’s an EQ and bypass others, there’s also the straight ahead use of compressing all frequency ranges.

What the multi-band compressor affords us is different degrees of responsiveness for the different ranges, which is really helpful considering how sensitive we want to be when mixing vocals.

Ask yourself things like: is the song leading the vocalist to always be quieter in a certain frequency range? Is there proximity effect on the recording? Is subtractive EQ taking too much character away from the vocals?

Maybe multi-band compression is your solution there.

This is a technique that can be applied with huge success to many parts of a track, and the vocal is no exception.

Here’s how to set it up: bus the vocals to an auxiliary track, put a compressor on the auxiliary track with a ratio of 10:1 or higher, and set the threshold so that the GR meter is reading a lot of reduction. Really “smash” the vocal on that track. Maybe there’s even some desirable mount of distortion occurring? Anyway, you are now compressing on a parallel track – hence the name.

The fader on that parallel track is now essentially a wet/dry knob for that compressed sound, so bring it all the way down and slowly fade it in to get a sound you like. Bring in a subtle amount and it will afford you all the robustness of a compressed sound without committing to an overall “squashed” quality.

If you’re excited about multi-band compression and parallel compression, you might want to look into the master mixer Michael Brauer. His pioneering mixing techniques rely heavily on both of those types of compression, to legendary results.

The final advanced compression technique to consider is side-chaining.

What? Side-chain the vocal? Sort of – and it’s not as crazy as you think. You may actually want to side-chain something else in the track to the vocal.

If there is something else in the track that’s very attention-grabbing, such as a bright synth pad or an insistent guitar part, consider side-chaining it to the vocal so that it ducks out of the vocal’s way just a bit. If you set the compression to be very light (low ratio) and very quick (short attack & release times), the listener will not directly perceive that it’s happening, but you’ll be giving the vocal just that little extra bit of help to sit clearly on top of your mix.

Doubling is a super useful technique in vocal mixing. We use multiple performances of a vocal line, or we replicate one vocal line and manipulate it – all to the purpose of creating a more attention-grabbing and full vocal sound. Most commonly, doubling helps with widening the stereo image of your vocal, which makes it feel just as present and powerful as any other epic instrument in your track.

In terms of panning, there are two main approaches to doubling. One is where there is a main vocal performance panned center, with two or more performances (“doubles”) panned out wide L and R, mixed very quiet. The other is where there are no vocals in the center, and the doubles out wide are brought up in volume. There is no optimal way to use doubling – it’s all about whatever sounds best for your track.

Remember that in general, doubling is best used subtly. It’s often intended to be imperceptible, while still giving the vocals a little boost. In light of that, one nice thing to remember as well is that different doubling techniques can be used in combination. Which are best to combine? All depends on the style of the track and what your ears tell you! Tons of artists ranging from Thundercat to Taylor Swift all use it in different ways. Try things out and see what you think is most effective.

How to use FX

As mentioned with Reverb and Compression in this article, make an active and educated decision about whether any effects will be applied to the main vocal track, or a dedicated auxiliary track. If you’re not sure what the difference would sound like, try both and compare!

If you’re applying multiple effects directly to the vocal, remember that the order of your effects chain matters.

Every order will have a different sound, and require different settings/ exploration. There is no single best order to use, and different orders are part of what gives mixes their different personalities.

In general though, from a practicality perspective, you might want to get some basic EQ out of the way before anything else. It’s like wiping down all the kitchen work surfaces before you cook a meal.

After that, its up to you! Explore. Follow where your ears lead you.

Automation is a secret weapon for a vocal mix. If you’re willing to put in the time and work, it makes a huge difference.

Automation is not just good housekeeping. It gives your mix a living, evolving quality that keeps the listener engaged. It’s a bit more painstaking, but that’s what it takes. Don’t sleep on automation!

There is a fine line between rote, formulaic mixing and utilizing helpful presets/ habits/ leanings.

Use the suggestions in this article not as an exact script, but as a jumping-off point. Find conservative presets & templates that make your life easier as a mixer, and then make the fine-tune adjustments from there. Find your style by exploring and following what excites you. Always compare back and forth between settings.

The bottom line: use your ears! And have fun out there.

Mike Brun is a composer, orchestrator, producer, and performer based out of NYC. He has served as band member for Shaina Taub, Cristin Milioti, The Revivalists, Krystle Warren, Kate Ferber, and is a frequent collaborator of choreographer Al Blackstone. His orchestrations have been performed at such legendary venues as Carnegie Hall, Lincoln Center, and Shakespeare in the Park. He holds a Masters degree from NYU in Music Composition for Film & TV, has released multiple singer-songwriter albums under his own name, and is hopelessly addicted to Cheez-its.

How to Arrange Vocals: A Creative Skill

How to Record Vocals From a Home Studio