How to Use Satire in Songwriting 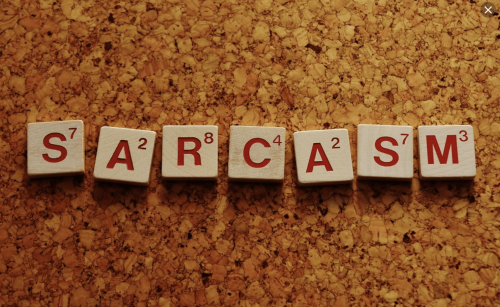 As a genre, “singer-songwriter” is widely perceived as confessional, biographical, and honest. It’s considered courageous to get up on stage with your instrument and tell the truth about your life and yourself in your songs. Songwriting, however, can do so much more than paint a realistic picture. Try changing perspective. Try using satire in songwriting.

Re-casting the role of “I” as a character besides yourself can open a door to many different ways to tell a story, smartly state opinions, and be a mirror to society through your work.

In this article, we’ll take a look at some successful ways artists have used sarcasm and alternate perspectives, and ways in which you can incorporate this in your own writing.

First, let’s focus on the use of sarcasm without assigning “I” a different identity than the songwriter.

In her beautiful, romantic song I Don’t Miss You at All, Norah Jones uses this technique to really pluck the heartstrings of her listeners.

A line from Shakespeare’s Hamlet has become a colloquialism: “The lady doth protest too much, methinks.” This is the human truth that Jones is tapping into with this song. The sarcastic denial paired with the romantic piano accompaniment (music by Duke Ellington) make it easy for the listener to tell that Norah does indeed “protest too much.” It so simply tells the story of a complicated emotion: missing someone so badly, but trying with all your might to banish the longing. It has a heartbreaking subtext: “maybe if I sing it enough, it’ll come true.”

Now let’s look at some of the great songs that implement a perspective change.

We’ll be focusing on the embodiment of a character to expose weaknesses and flaws, usually through humor. The definition of satire is: “the use of humor, irony, exaggeration, or ridicule to expose and criticize people’s stupidity or vices, particularly in the context of contemporary politics and other topical issues.”

Satire was first used in a theatrical context. As soon as songwriters got their hands on it they were off to the races. We’ll start with The Beatles’ song Tax Man.

Let me tell you how it will be / There’s one for you, nineteen for me. Cause I’m the tax man… / Should five per cent appear too small? / Be thankful I don’t take it all / If you drive a car, I’ll tax the street / if you try to sit, I’ll tax your seat / If you get too cold I’ll tax the heat / if you take a walk I’ll tax your feet!

The Beatles go as far to call out the politicians by name in the second verse. Rock’n’Roll is such an effective medium for political statements, but this satire cuts even deeper at the establishment. It evokes a sad chuckle from the listener. Our system continues to lack efficacy and justice, and the issues continue to deepen, maybe someday they will tax our feet.

Next up, Frank Ocean.

Ocean’s R&B/Hip-hop album “Channel Orange” is a creative masterpiece that made huge waves in the US and abroad in 2012. He uses all kinds of characters and pretend scenarios throughout, and even some very creative and romantic sarcasm (see Thinkin’ Bout You).

In Super Rich Kids, he personifies a spoiled child of millionaires and paints a bleak picture of the high life.

Start my day up on the roof, there’s nothing like this type of view, point the clicker at the tube / I prefer expensive news, new car, new girl… New watch, it’s good times / She wash my back three times a day, this shower head feels so amazing. / We’ll both be high, the help don’t stare, they just walk by, they must don’t care / Too many bottles of this wine we can’t pronounce… maids come around too much, parents ain’t around enough, too many joyrides in daddy’s jaguar… / Super rich kids with nothing but loose ends / Super rich kids with nothing but fake friends.

It’s glaringly obvious these are not the circumstances of Ocean’s real life, but his embodiment of these circumstances as the narrator, the “I” of the song, allows him to hit home his opinion of the vacancy that can come with materialism. The subtlety of this satire is masterful. The listener has a strange experience of two conflicting sentiments: perhaps some jealousy or idolatry, as well as pity. It is a criticism of the Western (US) society from the inside of its most problematic creation: unproductive, unhappy wealth.

Power of using “I” instead of “You”

Creating a character to play the role of “I” in your song can dramatically free you in your songwriting.

Her album Dirty Computer was released in 2018 and has political and cultural commentary all over it.

In this particular song, she takes on a character that feels like the very enemy of everything Monae stands for.

I like my woman in the kitchen, I teach my children superstitions / I keep my two guns on my nightstand / A pretty young thing, she can wash my clothes, but she’ll never ever wear my pants / I pledge allegiance to the flag, learned the words from my mom and dad / cross my heart and hope to die / with a big ole piece of American Pie.

The delivery of these lines is confident, almost defiant. The sincerity in her performance is a wink to her listener. Janelle is highlighting the flaws in, the ignorance of this point of view by taking it on as “I.” The character is called out for misogyny so fiercely that this song may have the power to topple the patriarchy. She calls out this character for blind and violent nationalism. Moreover, she subtly states the difference between fearful defense of a nation, and patriotism. Janelle even calls out organized religion, inherited (instead of learned and earned) faith, and the illusion that is the American dream. All this in a verse and a chorus? That’s the power of satire.

If these amazing songs changed every “I” to “you,” so much of the subtly, subtext, and graceful critique would vanish. They would become attack songs or lecture songs. The very embodiment of these characters by the artist makes a profound statement about their principles without them needing to say anything outright.

Satire can make what would be a corny “kumbaya” message or an aggressive protest into an intelligent and effective work of art that elevates society. That, or, it can help create a clever and timeless love song. We need both!

Use this tool in your writing and see how it can expand your voice, deepen your message, and heighten your material.

How to Use Humor and Satire in Songwriting

How To Expand Your Musical Vocabulary