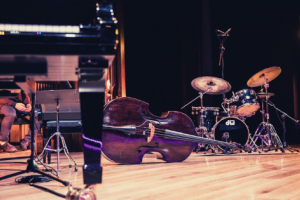 Over the past 8 years, Supreme Tracks has worked with over 1,500 clients, helping them create amazing songs and turning their demos into master tracks. One of our satisfied clients, Tim, reached out to us again for jazz song production.

He wanted us to produce another one of his father’s songs, written in 1975. The name of this pop jazz piece is Let’s try it again and Tim provided us with a demo of the song.

Since we worked with Tim before, we knew what kind of sound he was looking for – a modern vocal jazz song production with rich instrumental background. He didn’t have to explain to us in detail or send us any references this time around. We got straight to work!

After our producer and arranger listened to the demo, they came up with an arrangement draft that included the following setup: drums, double bass, piano, guitar, strings, french horns and a trumpet solo. The arrangement preview was then sent to Tim.

Note: sending an arrangement draft to client, containing verse and chorus idea, is a standard part of our arrangement process. It is done in order to make sure we’re headed in the right direction.

The New York-vibe trumpet was not what Tim had in mind, so he suggested we go with saxophone, as he thought it would work wonderfully for the solo, and that it should also be combined with the piano throughout the song.

As our top priority at Supreme Tracks is to help our clients create the best possible version of their songs, it is part of our job to disagree when we see fit.

Our arranger advised Tim to only keep the saxophone in the solo part, as adding the trumpet to the piano throughout the song would make everything sound chaotic. Tim accepted this suggestion, citing past good decisions we made.

Tim also had some ideas of his own about the intro, so he sent us a sample he created himself. We included this, as well as the other modifications Tim has asked for, and created a new,  full arrangement preview that we sent to Tim.

Tim really liked musicians who recorded his previous song, so he wanted them for this one as well.

We sent Tim an offer for live recording (drums, upright bass, piano, guitar, saxophone, French horns, string quartet, vocal), as well as mixing and mastering, and after he gave us a green light, we began the recording process.

With just the vocals remaining, we sent Tim everything we recorded for approval. We assumed Tim will love the tracks – we had a full and approved arrangement and studio tracking was done by top NYC’s jazz musicians that always give a stelar performance.

As we thought, Tim loved the tracks and requested no modifications.

Picking the best vocals, the voice to carry out your song just the way you imagined it, is a challenging task, but it is crucial and can also be very fun. When listening to session singers’ showreels you have to imagine them singing your tunes and lyrics.

In order for the singer you choose to give their everything, they have to like it… They have to feel the song and express the right emotions with their voice.

We suggested Benny. Benny is known in New York City as a young Sinatra. Benny loved Let’s try it again and was given the freedom by Tim to interpret the song in the way he felt was right.

Tim loved what he heard and requested no additional changes.

Tim wasn’t the only one who liked everything, though. His father, who originally wrote the song so many years ago, loved it as well and was super excited with the whole process! That was an amazing moment for us all.

We were ready to move on to mixing and mastering.

Since we already produced a song in a similar style and sensibility for Tim, we knew what he was looking for in the final mix. We used a lot of analogue, outboard gear to achieve that organic and pure sound. After a couple of feedback sessions and tweaks to the final mix, which is a standard process for the mixing, stage we were ready to master the song and ship it!

Tim was very, very pleased with the work we’ve done for him.

“It is amazing. I am absolutely thrilled. The mix is so fantastic. I think this is a wrap. You guys have outdone yourselves once again. Thank you again.”

Here it is. Let’s try it again in its full glory. Enjoy!

Note: On his dad’s request, we also sent Tim an instrumental version, without Benny’s vocals, so his dad could record vocals in his local studio with amazing arrangement and production backing him up. And we can’t wait to hear it.

Do you think working with a single team of experts that can cover all your recording and production needs is the smartest and fastest way to give life to your music and sound like the artist you’ve always wanted to be?

If yes, get in touch today.

We’ll first talk to you about your music, to understand your vision and your music’s intent. Then we will create a plan guaranteed to give your music the best life it can have and make it feel like it’s an extension of your soul.